A last-ditch bid to make an undisputed heavyweight title fight between Fury and the undefeated Usyk fell through just hours before the WBC champ’s showdown with Dillian Whyte went to purse bids.

Promoter Frank Warren claimed the Saudi showdown collapsed because AJ wanted an extra ‘£3.7million’ to step away from his rematch with Usyk, a demand that sent The Gypsy King up the wall back in February.

In an interview with iFL TV, Warren said: Tyson’s a big man, he can speak for himself. He don’t need me to tell you.

“But that’s what it was. I got a call off him [and] he was going berserk saying, ‘No, forget about it!'”

Warren claims Joshua’s alleged demand for more dosh was ‘the straw that broke the camel’s back’. 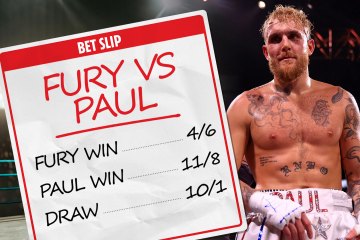 “And that’s the truth and that’s what happened.

“Everybody worked hard to get it where it was, but when he asked for that extra money; it’s the straw that broke the camel’s back.”

AJ promoter Eddie Hearn claimed a desert dust-up between Fury and Usyk broke down as the Brit wanted a warm-up fight before facing the slick southpaw.

“Eddie Hearn says lots of things and he’s part of the problem why these things don’t get over the line.

“A year ago when we were trying to put together a fight between Joshua and Tyson, every week he was saying, ‘It’s done, the contracts are being issued,’ despite the fact we all signed an agreement not to make any statements until it was done.”

However, he soon made a U-turn – with the temptation of fighting AJ or Usyk to good to turn down.

While Joshua’s rematch against Usyk is now scheduled for August 20 in Saudi Arabia.