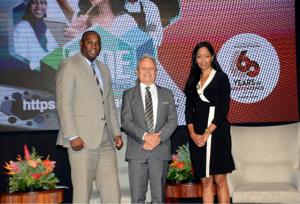 Delivering the feature address at the Hyatt Regency in Port of Spain, Minister of Finance Colm Imbert said in 2012 the Government announced its intention to work with the TTSE to create a third tier on the Exchange to provide SMEs with access to the capital market.

However, Imbert said since that initiative, only two companies have been listed, which are CinemaOne Limited, listed on November 21, 2018, at a price of $10; and Endeavour Holdings Limited subsequently listed on December 12, 2019, at a price of $12.50, with generally underwhelming market responses.

He noted that market capitalisation of these two companies in September 2022 was approximately TT$270 million, which represents less than 0.2 per cent of the overall market cap of the TTSE.

Imbert said, similar to the Jamaica Stock Exchange, eligibility to list on the TTSE SME market depends on several conditions, with approval at the discretion of the TTSE.

“The company must be incorporated with limited liability in Trinidad and Tobago or any other Caricom nation. In making a decision to approve an SME for listing, the TTSE considers the nature of the business, its financial performance, regulatory history, past governance activities, and historical records,” he remarked.

Imbert said Jamaica has been very successful with its Junior Stock Exchange.

“Where we have just two companies on the SME Tier of our market, both of which have struggled in recent times, Jamaica has 46 active companies listed on its Junior Market. So, we decided to see what was different in Jamaica that we could incorporate here,” the minister added.

According to Imbert, the key difference was the presence of mentors and in Jamaica, by strategically developing their competencies, and acting as a compliance adviser, mentors directly contribute to a company’s growth, innovation, and overall strategy, thus improving customer and investor confidence in the company.

Imbert noted that complementary to the tax incentives and to ease the operational burden of listing, the Government in collaboration with the Central Bank and the Stock Exchange has thus designed a similar Mentorship Programme that would provide the necessary support to the SMEs and close the gaps of insufficient documentation, as well as ensure adherence to compliance and corporate governance standards.

He said the proposed SME Mentorship Rules were published by the TTSE in June and approved by the Securities and Exchange Commission in August.

The minister also mentioned that by the end of November SMEs could begin to access a $500 million long-term guaranteed loan facility, backed by the Government, and available at local commercial banks.

Imbert said the new Long-Term Loan Guarantee Scheme for SMEs will be managed by First Citizens, in collaboration with other commercial banks.

The Government loan guarantees will be for up to 80 per cent of the value of the loans, for a term of up to 10 years, inclusive of a two-year moratorium on repayments and will focus on the non-energy sector. To ensure that SMEs have skin in the game and thus an interest in repaying these guaranteed loans, SMEs will be required to put up 20 per cent of the required security,” he explained.