The first thing you see on Prince Harry’s book cover are his eyes. Positioned in the center, and with a fixed gaze on the reader, they hold an expression that has been chosen over all others to set the tone for this much-anticipated memoir. Steely is one way to describe the look. Determined perhaps another. Serious, certainly—yet not totally morose.

But in this case, it is not important how many words a picture paints, because when the book is released on January 10, Harry’s thousands of words will come tumbling out into the world. Well, to be completely accurate, his words filtered through ghostwriter JR Moehringer. But there can be few now left in any doubt that the Prince has decided to seize this moment to unleash his story, as he sees it, definitively.

So dominant is Harry’s face on the front cover that the book’s title, nestled in thin letters beneath his chin, almost appears as an afterthought. But it is a title that has been chosen to be anything but passed over. It is a title that marks a true turning point. After months of whispers that his memoirs were (or should be) rewritten or “toned down” in the wake of the Queen’s death or that they were delayed or even being scrapped altogether, Harry’s provocative decision to label himself the Spare suggests the opposite is true. His publisher is promising “raw, unflinching honesty” and it is now easier than ever to believe this will be the case. There could be devastating implications for his family and the monarchy. 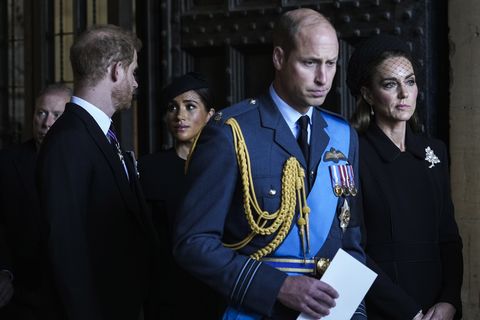 Harry and Meghan briefly reunited with the royal family at Queen Elizabeth’s funeral earlier this year.

The phrase the “heir and a spare” is believed to have been first uttered by American heiress Consuelo Vanderbilt in describing her two sons with her British aristocrat husband, whom she married in 1895. It has been used prolifically to refer to British royalty for the past 100 years—with Princess Margaret often described as Queen Elizabeth’s spare and Prince Andrew (and sometimes ostensibly Princess Anne) labelled the spare to Charles. It is a word that Harry knew was attached to him as he grew up alongside his brother, the heir Prince William. But it is not a word that you would ever expect to hear the royal family use officially.

Harry’s very public embrace of it, therefore, can be seen as a symbol that he has once again crossed into territory where the monarchy would not go. It signals to us that he will talk about things in a way that once he did not; a precursor that much will be unleashed when the pages of the book are turned. It also has the effect of reminding us of the impenetrable hierarchy that sits at the heart of monarchy—a system that means by accident of birth some are heirs and some are spares. An entrenched system of hereditary privilege and precedence that cannot be modernized without being abandoned. It puts front and center that which the modern royals work hard to help us forget—that their positions in life are determined long before they are earned.

Located right underneath Harry’s face on his book cover, Spare might trigger thoughts of what it means to have this word—which among other things can be defined as superfluous to requirements—attached to a person. Whether or not you feel pity for the Prince will likely be determined by the views you already hold on the Sussexes and/or the royal family, which in many people’s minds are deeply entrenched. But you may wonder anyway what it might be like to be described as spare.

Harry and Meghan at the Commonwealth Day Service in 2020, one of their final public events in the UK before stepping back from their senior royal roles and moving to North America.

There are just a few weeks to go until we get to know what Prince Harry wants to tell us about that, along with many other things about how he sees the world. Of all the pivotal “no going back” moments since he and Meghan left royal life, this is perhaps the most significant. The man who once fiercely guarded his private life now wants to broadcast it, raw and unflinchingly. The prince who spent his life inside the fold is now on the other side—or perhaps we should say he is on another side. Of course the revelations will be lapped up and make headlines for days, perhaps weeks depending on what is uncovered. And all eyes will be on the polls to see to what extent anything Harry shares shifts the dial on public opinion.

This is the Prince’s chance to tell his life story on his own terms, and a lot is at stake. His truth can also significantly influence how his family members—who continue to say very little publicly about anything that has happened behind closed doors—are seen. One hopes that when it is all out in the open that Prince Harry can pick up his book and look himself in the eye.

Town & Country Contributing Editor Victoria Murphy has reported on the British Royal Family since 2010. She has interviewed Prince Harry and has travelled the world covering several royal tours. She was the Daily Mirror‘s Royal Correspondent and is a frequent contributor to Good Morning America.