KRIS Jenner had a hair-raising experience when she went jet skiing, in a resurfaced clip from the family’s famous reality show.

All was going well, as the momager sped over the ocean waves with ex husband Bruce Jenner sitting behind her, until the long brown hair wig she was wearing suddenly flew off, and into the water.

Her kids could do nothing but laugh at the lighthearted moment.

It was an emotion that was echoed on TikTok, where the resurfaced clip was shared.

In addition to a plethora of one-word comments, like: “hysterical, priceless and hilarious,” some fans found humor in specific details.

“Not sure what kind of monster wouldn’t find this hilarious,” one person commented. 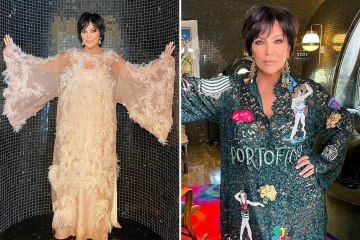 Another deadpanned: “Always knew there was something fake about them.”

While a third confessed: “Never knew she wore wigs. I do now.”

It’s rare to see a raw Kris, but the 66-year-old momager revealed her real skin texture in April, during a laser-treatment session with a Beverly Hills dermatologist.

Kris looked fresh-faced as she showed off her glowing complexion and had her hair pulled back.

The reality star shared a photo of herself getting a laser treatment, captioning it: “The laser before the laser.

Kris has been busy changing up her looks lately as she recently shook up fans after debuting her new haircut.

In a recent video, Kris rocked a short bob with bangs – a major change from her usual short style.

The new look has received plenty of mixed reactions with one person saying: “Kris needs to stick to her signature hairstyle…”

Another commented their support, however, and said: “I think it’s cute actually.”

A third wrote: “I think she looks lovely, reminds me of those old photos of her where she had this similar short bob.”

A fourth added: “The bob is cute.”

The mom of six’s looks have been a hot topic among fans as of late.

The reality star found herself the topic of discussion after a throwback clip from Keeping Up With the Kardashians surfaced online.

In the video, Kris took in her kitchen with an arm leaning on the counter.

She appeared to be sporting a natural look with very little makeup on and a casual white top.

The person who posted it on Reddit captioned the clip: “It’s so refreshing to see a natural-ish looking adult woman!”

Many other users agreed, with one writing: “It’s wild to look back on them dressing like ‘regular people – I even remember Kim being decked out in Victoria’s Secret Pink in a couple episodes!”

Another wrote: “The money coming in after a few seasons sends them on a trajectory of opulence and spending I’ve rarely seen from other celebs.

“It’s astonishing how much their lives changed and they were already living very comfortably before the sex tape.”

A third Reddit user got in on the action, writing: “Omg what a throwback! I think that’s why I loved the Kardashians from 2007-2009. They were rich but still relatable and somewhat attainable?”