The Teen Mom OG stars went all out, toasting with bubbly drinks on a black party bus and more.

The Challenge star and ex Cheyenne, 29, got together along with her fiancé Zach Tyrell to celebrate daughter Ryder, five, graduating Pre-K.

Cory took to his Instagram Stories on Saturday to document his preparations for the “prom”-style party, walking while holding a bouquet of flowers for his oldest daughter.

He shared with fans: “Ms. Ryder K has pre-school graduation and they like to call it prom, so Ryder is going to her first dance. I had to get her some flowers. We’re about to have some fun.” 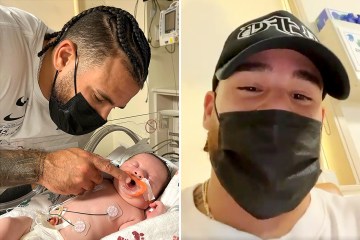 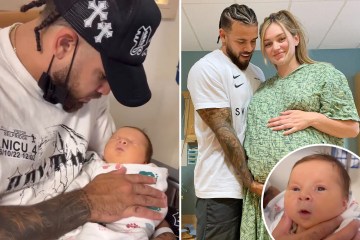 He concluded his message with: “I’m proud of you baby girl.”

Cory was then seen with his daughter, who appeared to have just finished getting ready for the special day.

Her hair was in a half-up, half-down style and she had on makeup and an adorable pink dress.

In the Instagram Story video, Cory gushes to his daughter: “You look so pretty,” to which she responds, “I know” before breaking into song and dance.

Ryder sings: “Got me some flowers,” while holding the bouquet from her father and shaking her hips.

She then strikes a few poses as Cory gives fans a glimpse at her full prom look.

Ryder flashes her pink dress, which features a beaded and bedazzled bodice and fluffy, full skirt.

She also flashed a pair of chic black boots, which she paired the look with.

Cory and Cheyenne’s daughter was all smiles on her big day.

After she and the rest of the crew were prepped and ready, Cory, Cheyenne, and Zach hopped onto a black party bus to head for the party.

Cory gives his daughter a reminder before the “prom,” saying: “Remember the No. 1 rule: don’t dance with any boys. Only your father.

“No boys, only your dad. And we’re gonna do a daddy-daughter dance, alright?”

Ryder was joined on the party bus by a friend, whom she did a cheers with before the party.

A tiny Jacquemus bag retailing for more than $500 could be seen lying on the armrest next to Cheyenne and Cory’s daughter.

Ryder previously showed off the pricy purse in photos.

The Kindergartener’s mom shared a similar video on her own Instagram Stories, doing a cheers with Ryder and Zach.

She captioned the post: “Pre-K prom so proud of our baby!”

After the party was underway, Cory returned to social media to acknowledge how extravagant the bash was.

He said on his Instagram Stories: “Just because I come from Grand Rapids, Michigan – we come from not much, I’ll say that – this is a pre-school graduation.

He panned around the outdoor event space, which included a massive pool, tables with umbrellas, snacks, and other goodies for revelers.

It’s been an exciting few days for Cory, who shared with fans the emotional moment he finally got to hold his newborn daughter just before Ryder’s graduation.

In his Instagram Story video, the proud dad revealed to fans: “You guys, I only got to hold her one other time.”

He zoomed in on her face as he said: “There she is!”

The infant pouted her lips and let out a tiny burp.

Cory and Taylor giggled as Maya fell back asleep.

Over the weekend, the reality star revealed that Maya was diagnosed with Tricuspid Atresia, a form of congenital heart disease.

He said: “It happens when the heart’s tricuspid valve does not develop.

“This valve plays a part in the heart’s essential function, which is to pump blood between the lungs and body.”