HOLLYOAKS star Stephanie Davis has revealed her very painful skin condition which has left her with “weeping wounds”.

Stephanie, 29, told fans she had ripped her skin from scratching and the sore rash has left her in agony.

The actress has been suffering so badly that she has refused to leave her house.

“So you’ve all been asking me for updates on my skin but I’ve not really wanted to share what a look like with you all because it’s so bad – I’ve put a filter on now because I feel so embarrassed and I’m hiding away really,” Stephanie said.

“It’s come up all over my body in different places, I’ve just myself to bits scratching.

“I don’t like you all seeing me like this but this is topical withdrawal or steroid withdrawal which I’m just trying to go through the process.” 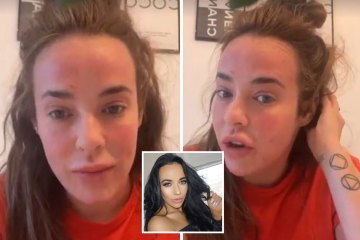 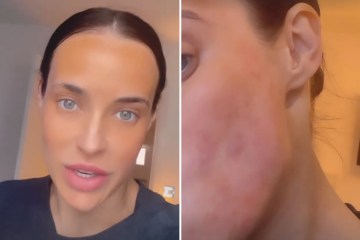 She continued: “I’ve been a bit stressed and it’s not made it any better, it’s made it worse.

“Just when will there be a day free with my skin, days go by and it’s getting worse before it gets better.

“I just don’t want to leave the house and stuff.”

Stephanie showed photos of her red raw skin which continuously flakes off.

The star showed the weeping cracks in her neck and admitted it was “getting her down” and making her feel “depressed”.

“I can’t wait to get dressed up and put tan on and not f***ing picking skin from under my nails and leaving a trail whereever I go.

“I am sick of itching, it is so sore all over.

Earlier this year, Stephanie opened up about her condition that has affected her confidence.

She told: OK!:”The issue started in August last year, on reflection it was stress that started it all up. I’ve noticed now if I get very stressed my skin flares up.

“I even tried smothering my face and chest Greek yoghurt to help cool my skin from the awful burning, I just wanted to dunk my whole face in a bucket of something to relieve the pain.

“I’ve literally tried everything!” the star reflected on her frustration, admitting that at one point her skin became so “tight and crusty” and start shedding “like a snake” that she was “unrecognisable”.

She added: “It affected my confidence so badly that I just didn’t want to leave the house.”

Stephanie eventually had a 3D Dermaforce treatment to rejuvenate and regenerate her skin.

In January, her stalker Alex Boston was jailed for 28 weeks for his three month campaign of terror that forced Stephanie to move house.

“It definitely had a big impact on my mental health,” she said during an appearance on This Morning.

“I struggle with my mental health anyway. When that happened my anxiety was through the roof, I couldn’t relax.

“I was constantly having panic attacks, every time I heard a noise I was up panicking.”

Stephanie found fame playing Sinead Shelby on Hollyoaks from 2010 to 2015.

She returned to the popular Channel 4 soap in 2018 but left again last year to pursue new projects.

Stephanie gave birth in 2017 to son Caben with her ex Jeremy McConnell.

She is now dating Joe Mckalroy after going Instagram official earlier this year.