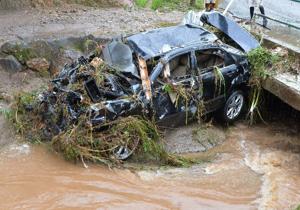 GOVERNMENT has received a total of US$5.84 million (TT$39.42 million) from the Caribbean Catastrophe Risk Insurance Facility (CCRIF) following the heavy rainfall that occurred in T&T earlier this month

Forty-one-year-old farmer Theresa Lynch lost her life when she was swept away by floodwaters in her village of La Pastora in Arouca.

The Ministry of Rural Development and Local Government reported a total of 75 incidents of flooding.

Landslides were reported along Mason Hall Road and Plymouth Road between Summer Hill and Whim Development.

The Water and Sewerage Authority (WASA) reported that the heavy rainfall impacted operations at 25 surface water treatment facilities in Trinidad’s northern region and four in Tobago.

In a September 3, 2021, news release on its website, CCRIF said since Trinidad and Tobago purchased coverage for excess rainfall in 2017, the country had received payouts under its excess rainfall policy each year – five payouts totalling US$12.5 million. The payout earlier this month makes it six payouts in six years for a total of US$18.34 million.

The risk insurance facility said in September 2021, previous payouts to Trinidad and Tobago for excess rainfall were made, for example, for the periods of heavy rainfall on October 18 and October 20 in 2017 and 2018 respectively, with the Government receiving a total of US$9.5 million for those two events.

“The two payouts in 2017 and 2018 were used by the Government for general cleanup such as clearing debris; providing building materials and appliances to households impacted by the rains; providing payments to relief workers; and for repairs to the Uriah Butler Highway (the Caroni section of the highway), which was damaged by the 2018 rains,” said CCRIF.

The Government of Trinidad and Tobago also has cover for tropical cyclones (one policy for Trinidad and one for Tobago) and for earthquakes.

The US$5.84 million CCRIF paid to the T&T Government was part of four payouts totalling US$15.2 million that the institution disbursed for rain damage this month.

CCRIF said a country’s policy with the facility is triggered when the modelled loss for a hazard event in that country equals or exceeds the attachment point (similar to a deductible in a traditional insurance contract) selected by the country, which is specified in the policy contract between CCRIF and the country.

Parametric insurance offered by CCRIF provides a level of financial protection for countries vulnerable to natural hazards, the facility said.