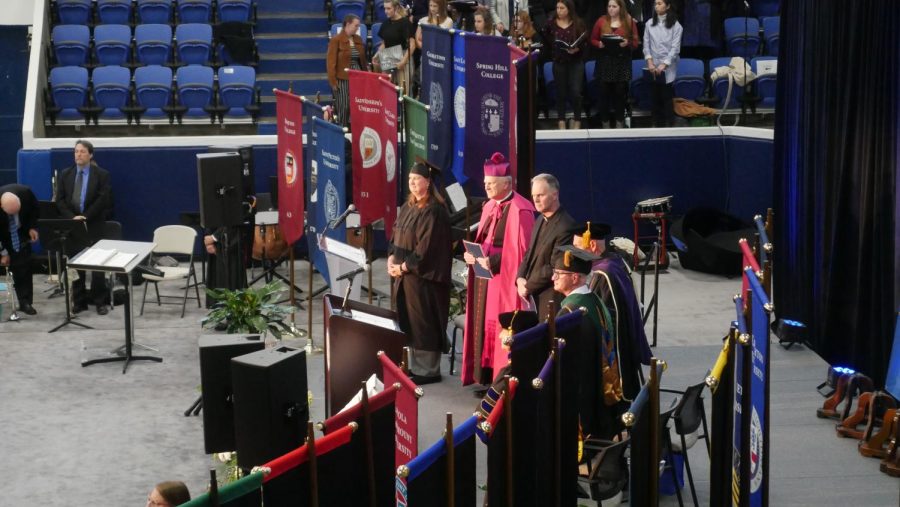 The theme of the inauguration proceedings was “We Are Called,” which appeared to represent the event, as it featured students, leaders and alumni discussing the offerings of Rockhurst and the impacts it has on lives, as well as the community. The idea also came from the inscription on the Rockhurst University bell tower which starts with, “You Are Called…”

The inauguration day started with a mass in St. Francis Xavier Church where Cassady was sworn in to work as she could for the Society of Jesus. After the Mass was the installation, which featured speakers such as staff, students, community leaders, alumni d Family members that were in the Mason-Halpin Fieldhouse.

“I thought it was good,” said Elliott Rocha, a senior at Rockhurst University who sang in the choir for the mass and installation, “It was cool to watch because this probably won’t happen again for a long time. It was history, and I believe that she will do well. I believe she is the first female president at Rockhurst.”

The installation had both alumni and students in attendance at the stadium, and they watched the speakers give their blessings and well wishes to Cassady. Kansas City Mayor Quinton Lucas was in attendance, and he noted the impact Rockhurst University has on the Kansas City community. Wanda Taylor, a community leader from the Troost neighborhood coalition, also gave blessings to the KC community noting the volunteer work and benefits Rockhurst brings to the community.

Bri’Yana Merrill, student senate president and representative of undergraduate students, gave a poem to represent the achievements of Cassady and also made reference to Cassady’s fantasy football habits, which appeared to draw some laughs from the crowd.

If not the most touching speech, which also appeared to cause Cassady to tear up came from Cassady’s brother, Colonel Michael Hauser, who noted Cassady’s leadership abilities and compassion.

“Rockhurst University has all of that, and so much more in you,” said Hauser, “We are all very proud of the countless lives you have positively impacted with your servant leadership.”

Sandra Cassady wrapped up the speakers by thanking the audience and her family in attendance, including her mother, husband, brother and children. She then took the focus off her and noted the day as a day to celebrate Rockhurst University.

“We are called to create a more just world through access to all our academic offerings, innovative programs and learning experiences, and transformative education,” said Cassady. After she spoke, the inauguration ended, and the reception began in the Convocation Center. The reception celebrated and gave congratulations to Cassady, as well as provided refreshments. She spent the time conversing with students, as well as faculty and community members.

“It is hard to replace Father Curran, but I am hopeful,” said Chelsea Sims, a junior at Rockhurst University, “Dr. Cassady seems like a well-meaning lady, and I am excited to see what she will bring to Rockhurst.”

This tone appears representative of the Rockhurst University community and the inauguration theme. While Fr. Curran did well as a school leader and representative, many are hopeful for the next chapter in Rockhurst’s future, as Dr. Cassady continues to transform Rockhurst University in the years to come. Many of the community, students and alumni present were reminded of the good attributes of the Rockhurst institution and why they are .