JOE ROOT holds the destiny of the First Test in his hands and faces as much pressure as when he was captain.

He can do his friend and successor Ben Stokes the biggest favour imaginable on Sunday by piloting England over the winning line.

Root finished 77 not out as England reached 216-5 in their second innings on day three of the First Test with another 61 runs required.

If Root thought giving up the leadership would stop his nerves being shredded, then he knows now that tension will continue to follow him around.

The 31-year-old and Stokes guided England back into the match after they were struggling at 69-4 in pursuit of 277 for victory.

Stokes enjoyed a huge slice of fortune when he was bowled by a no-ball having scored just a single. 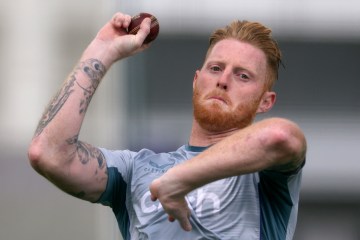 But he and Root were giving his team the scent of victory before Stokes departed in slightly freakish fashion for 54 – gloving a catch behind as he attempted an uppercut shot off Kyle Jamieson.

After Stokes was out, Root increased his tempo knowing that England do not have much batting after wicketkeeper Ben Foakes.

That pair have so far put on 56 for the sixth wicket.

Root could complete an historic double because he is just 23 runs away from becoming the second England batter after Sir Alastair Cook to reach 10,000 Test runs.

The match is in the balance, perhaps 70-30 in England’s favour, and what a boost it would be for Stokes and head coach Brendon McCullum in their first game in charge if England can improve their sequence of one win in their last 17 Tests.

It has been made possible by the batting of Root and Stokes and England’s bowling on the third morning, when they took the last six New Zealand wickets for 34 runs in eight overs.

Three of them came in three balls from Stuart Broad – but it wasn’t a third Test hat-trick for Broad because the middle wicket was a run out.

A target of 277 on a pitch that offered few demons certainly gave England a big chance of ending the roller-coaster ride of this match on top.

Jamieson persuaded left-hander Lees to leave a ball – only for it to crash into his off stump.

Lees has got into the habit of scoring 20s and 30s at the top of the order for England. He must start to make more significant contributions.

Crawley nicked to third slip – not for the first time – and then Ollie Pope was bowled by a beauty from Trent Boult.

Jonny Bairstow was in no mood to hang around and he quickly took three boundaries in a single over from Boult.

But he attempted another aggressive shot against Jamieson and had his stumps rearranged.

England were in big trouble at 69-4 and it would have been 77-5 if Colin de Grandhomme had not over-stepped for a no-ball when Stokes, advancing down the pitch, dragged on.

De Grandhomme completed a day of absolute misery when he limped off shortly afterwards with a heel injury.

Stokes took his time, frequently watchful, although he tucked into the bowling of Ajaz Patel, hoisting three legside sixes in the spinner’s two overs.

But then Stokes departed after a fifth-wicket stand of 90 runs and responsibility for England’s fate shifted to Root.

And it all looked fine for New Zealand when Daryl Mitchell reached his century from his first ball of the day with a drive for three off Broad.

Broad had endured a quiet match until, suddenly, three wickets fell in three balls in the 84th over.

He had Mitchell caught behind and then appealed for lbw against de Grandhomme next ball.

The verdict was not out but, as he waited for the umpire’s decision, the batsman wandered out of his crease and Pope threw down the stumps.

De Grandhomme was run out and, let’s be honest, it was a dozy piece of cricket by the Kiwi all-rounder.

There was more to come as Jamieson was bowled by Broad’s next delivery. Broad has two personal hat-tricks for England and this was a team hat-trick.

Tom Blundell was lbw to James Anderson for 96, Patel went the same way to Matthew Potts and Matt Parkinson collected his first wicket in Test cricket when Tim Southee edged to slip.