DEFIANT leader Volodymyr Zelensky smiles for a selfie with people in eastern Ukraine while rallying troops on the front line of the Russian war.

Ukraine’s president even signed a woman’s arm as he visited families forced to flee their homes.

Yesterday Boris Johnson said he had an “in-depth” chat with Mr Zelensky — as he tried to get on with the day job despite facing a Tory rebel plot.

Later, the PM said: “The Ukrainian people will not bow to Russian brutality.

“We’re unwavering in our mission of ensuring Ukraine is defended and supported for the long-term.”

Mr Johnson confirmed Britain would join the US in sending Ukraine long-range multiple-launch rocket systems to “repel the Russian onslaught” and smash targets up to 50 miles away. 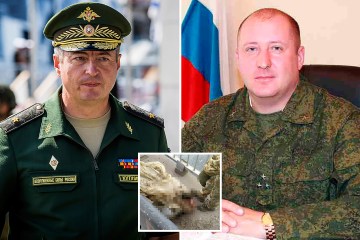 Elsewhere, specialist legal and police teams are to be offered up to assist chiefs investigating Russian war crimes.

Mad Vlad has vowed to zone in on even more targets in retaliation for the move.

The dictator’s forces are focusing their efforts on the east of the country after their main offensive failed.