In what could be one of their boldest moves away from traditional royal life yet, the Duke and Duchess of Sussex are reportedly about to enter the metaverse.

According to The Mirror, Price Harry and Meghan Markle are working with a Zurich tech company to build their own world in new virtual universe.

Dubbed the next stage of the internet, the ‘metaverse’ is a collective virtual shared space accessible online, featuring avatars of real people.

Users don headsets to enter a virtual reality mimicking real life, where goods, services and land can be exchanged using currencies such as Bitcoin.

MailOnline takes a look at the celebrities who have already embraced the technology, including Snoop Dogg, Justin Bieber and Paris Hilton. 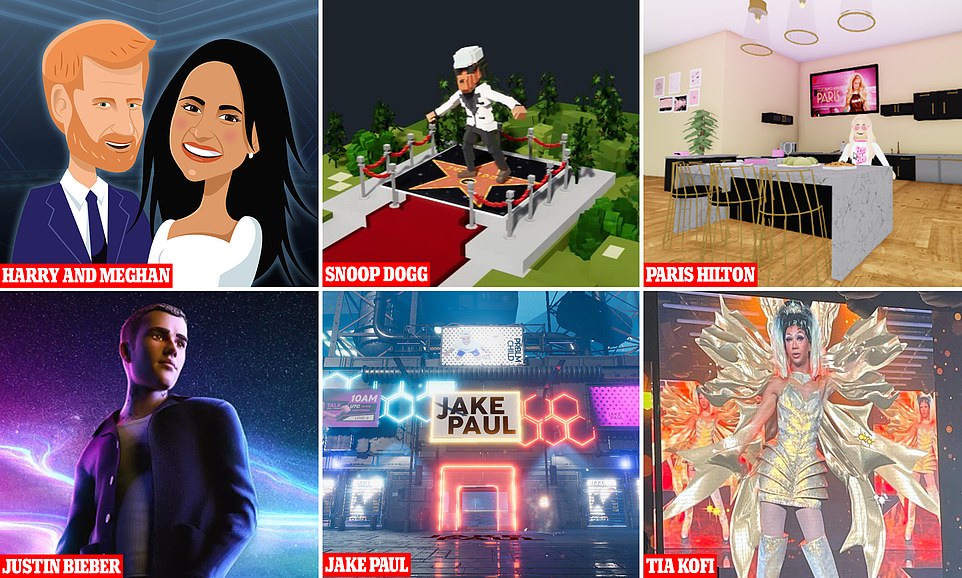 The Duke and Duchess of Sussex are reportedly about to enter the metaverse. Pictured is MailOnline’s impression of what Harry and Megan’s avatars could look like in the metaverse

WHAT IS THE METAVERSE?

Mark Zuckerberg’s company changed its name from Facebook to Meta in October 2021, as part of its long-term project to turn its social media platform into a metaverse.

The metaverse is a collective virtual shared space featuring avatars of real people, accessible over the internet.

Whether the metaverse fully exists yet is debatable. Meta has already introduced some platforms, like Horizon Workrooms, that provide a glimpse of what the metaverse is like.

But by definition the metaverse is a digital space that always exists – one that multiple people are always logged into at one time. This is what Meta is working towards.

Part of Meta’s ambition is turning Facebook into a metaverse. In the future, Facebook will be accessible within the metaverse using virtual reality (VR) and augmented reality (AR) headsets and smart glasses.

The Duke and Duchess of Sussex are in talks with an award-winning technology company to enter the metaverse, The Mirror reports.

Meghan and Harry could appear in their metaverse as digital avatars of themselves to conduct business meetings or make special guest appearances.

Zurich tech firm Pax.world is understood to be the prospective partner for the new business plan, with the duchess as its driving force, according to The Mirror.

A source said: ‘Both Meghan and Harry believe they will an even greater ability to spread their message if they have a presence in the virtual world as well as the physical world.

‘They’ve spoken to a variety of experts and the view is this is the next stage to take their brand truly global.’

Harry and Meghan have increasingly moved away from traditional royal duties since their decision to ‘step back as senior members’ of the royal family was announced in January 2020.

They’ve since signed up with Netflix for a fly-on-the-wall documentary series, reportedly delayed until 2023.

Meghan also has her own podcast on streaming platform Spotify called Archetypes, while Harry’s new autobiography, ‘Spare’, is set to be published in January.

US rapper Snoop Dogg is recreating his real-life mansion in Diamond Bar, California within The Sandbox, a virtual world that uses the cryptocurrency Ethereum to enable transactions.

The musician has already conducted a land sale, giving fans the opportunity to live next door to him in his metaverse, called the ‘Snoopverse’. 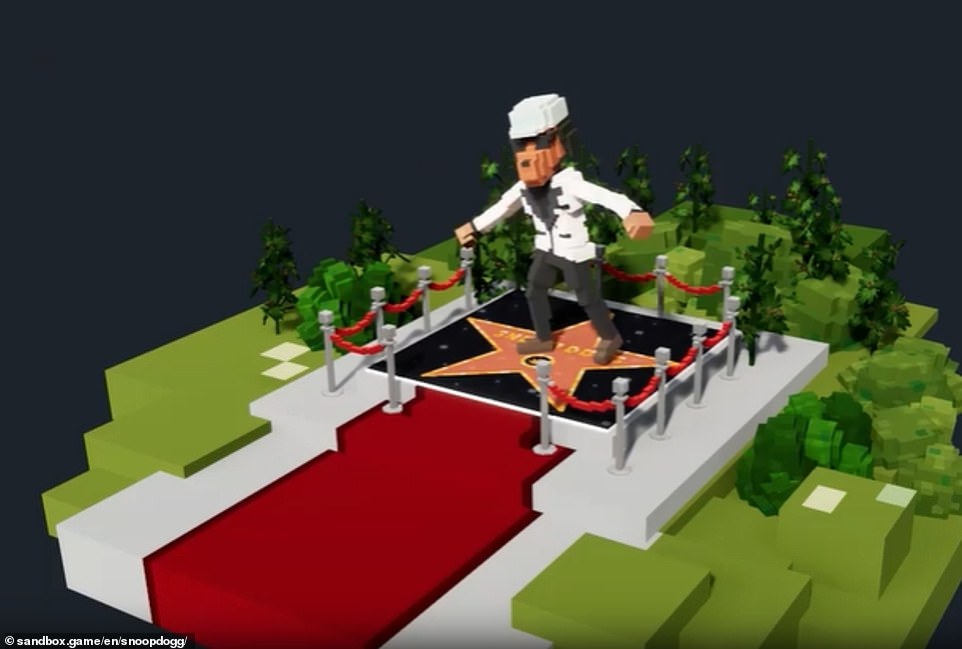 What is The Sandbox?

The Sandbox is a virtual world where players can build, own, and monetize their gaming experiences in the Ethereum blockchain.

It uses several token types to ensure a circular economy between all types of users who interact there – players, creators, curators and land owners.

For example, SAND is used as the basis for all transactions and interactions, while LAND is a digital piece of real estate in The Sandbox metaverse.

Fans can purchase a ‘Snoop Dogg Private Party Pass’ that lets them attend his private metaverse parties, get access to exclusive NFTs and enjoy other ‘priceless experiences’.

The rapper also launched The Doggies, an NFT collection comprised of 10,000 computer-generated Snoop Doggs, playable in The Sandbox.

An NFT (non-fungible token) is a unique digital token encrypted with an artist’s signature, which verifies its ownership and authenticity and is permanently attached to the piece.

However, NFTs been criticised as money-making scams that have no real use or value in the real world.

Inside the ‘magical new world’, visitors can transport themselves to ‘an immersive fairytale island’ that’s filled with ‘unicorns, dazzling rainbow rivers and forests made of cotton candy’.

They can also explore digital replicas of her Beverly Hills estate and its accompanying ‘doggy mansion’ for her pet pooches, go shopping or fly on her private jet.

Like other virtual hangouts, Paris World collects small payments for purchasing virtual clothing or booking a ride on a jet-ski, according to Reuters. 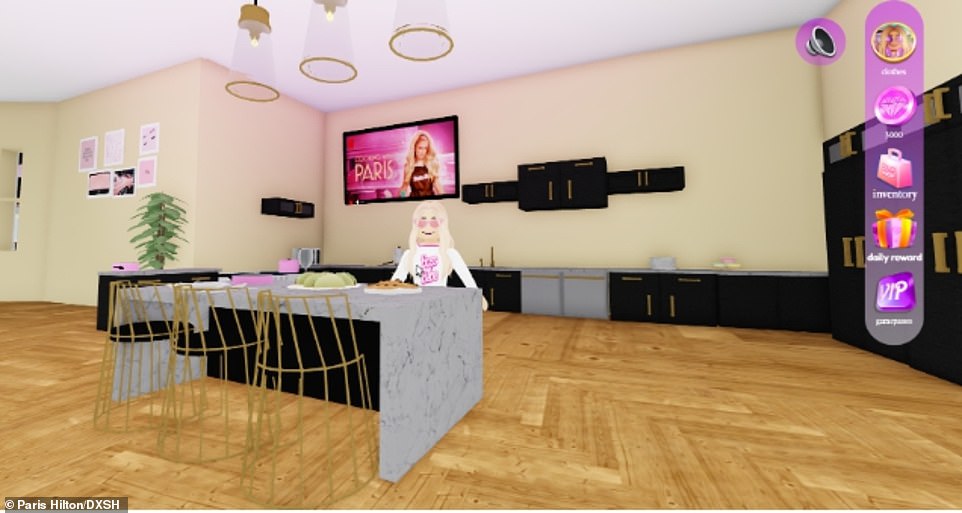 Pictured is the avatar Paris Hilton inside her virtual home. Like other virtual hangouts, Paris World collects small payments for purchasing virtual clothing or booking a ride on a jet-ski

A non-fungible token (NFT) is a unique digital token encrypted with an artist’s signature and which verifies its ownership and authenticity and is permanently attached to the piece.

Most NFTs include some kind digital artwork, such as photos, videos, GIFs, and music. Theoretically, anything digital could be turned into a NFT.

At the moment, NFTs are most commonly sold in so-called ‘drops’, timed online sales by blockchain-backed marketplaces like Nifty Gateway, Opensea and Rarible.

‘For me, the metaverse is somewhere that you can do everything you can do in real life in the digital world,’ said Hilton.

‘Not everybody gets to experience that, so that’s what we’ve been working together on over the past year – giving them all my inspirations of what I want in that world.’

On New Year’s Eve last year, Hilton played an electronic set for virtual revelers who attended her virtual island on Roblox, letting people ring in 2022 without leaving their homes.

Hilton has also capitalized on the recent craze for NFTs – she’s collaborated with designer Blake Kathryn to sell three unique pieces of digital art, one of which sold for more than £800,000 (£670,000).

Canadian teeny bopper Justin Bieber introduced a wave of young fans to new technologies last year when he held his first concert ‘inside the metaverse’.

The pop star donned a motion capture suit that translated his movement onto a digital avatar in various CG environments.

According to a review in The Stranger, he danced to a soundtrack of a few of his hits ‘while a Sims-looking virtual crowd cheered’.

Fans were able to watch the concert through the Wave platform, as well as the live broadcast on Bieber’s official YouTube account. 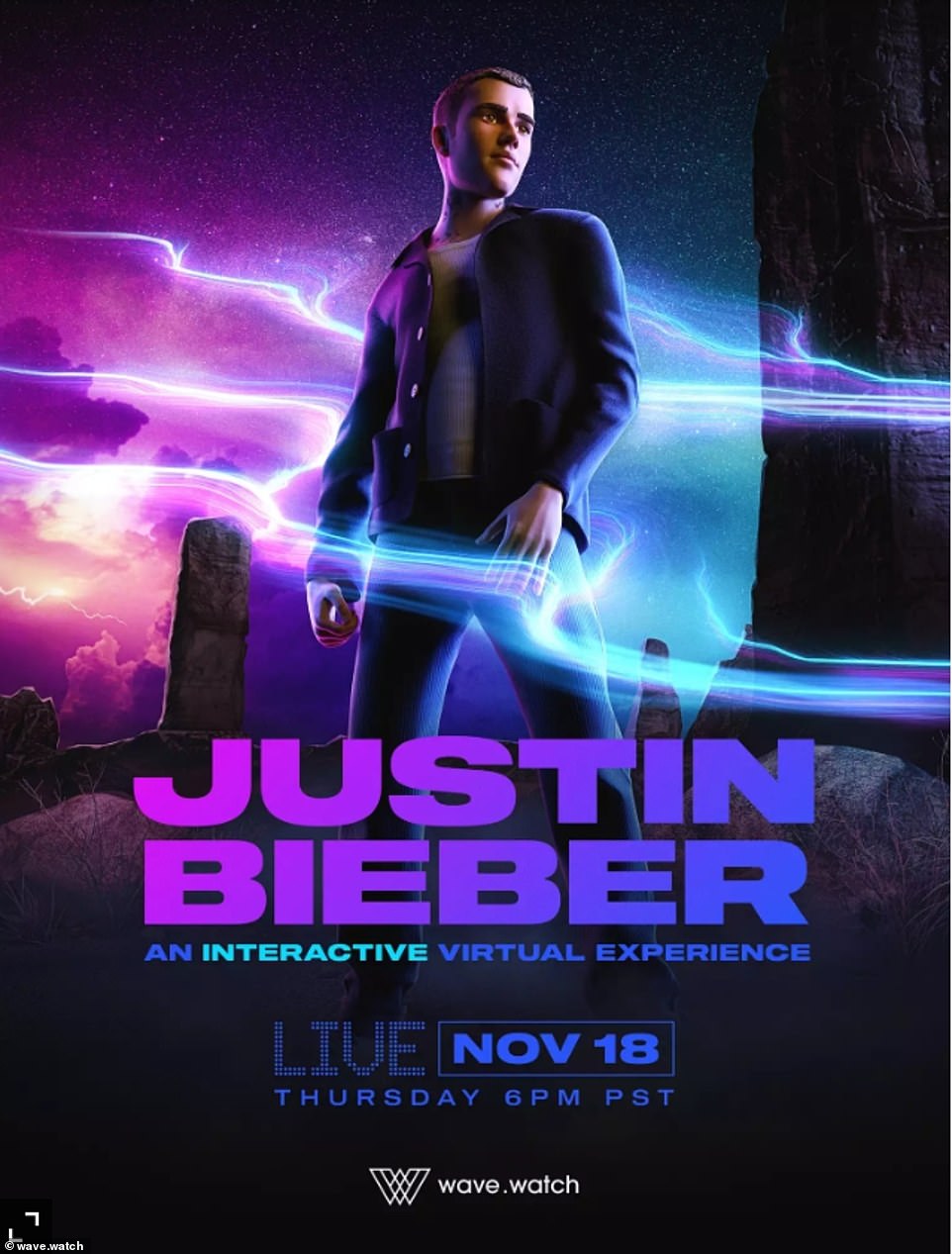 They could also appear in the background – not as avatars but their real selves – by logging in to Zoom.

Although not a fully immersive metaverse experience, Beiber’s concert gave people a glimpse of what attending popular events could be like in the near future.

As part of the ‘Ballman Project’, he’s launched a collection of 6,200 NFT tennis players that owners can use to participate in the virtual tennis tournament.

Each NFT ball gives players unique attributes like power, speed and mental strength that can help them win awards such as Ethereum prize money.

Participants can enhance their player’s skills (better tennis gear, better shoes, training, rest or even a coach) to help win awards such as Ethereum prize money.

Matches are taking place within ‘Ballman Meta Stadium’, a virtual venue that can instantly change its court surface, from grass to clay and back again.

US boxer, entrepreneur and YouTuber Jake Paul owns a home in the crypto-oriented metaverse space Bloktopia.

Alongside Jake Paul’s pad are other buildings with flashing neon signs showcasing the names of brands in the crypto space including Kucoin, Duckdao, BitBoy and Crypto Wendy-O.

Within Bloktopia the purchase of real estate is known as Reblok (Real Estate Blok). 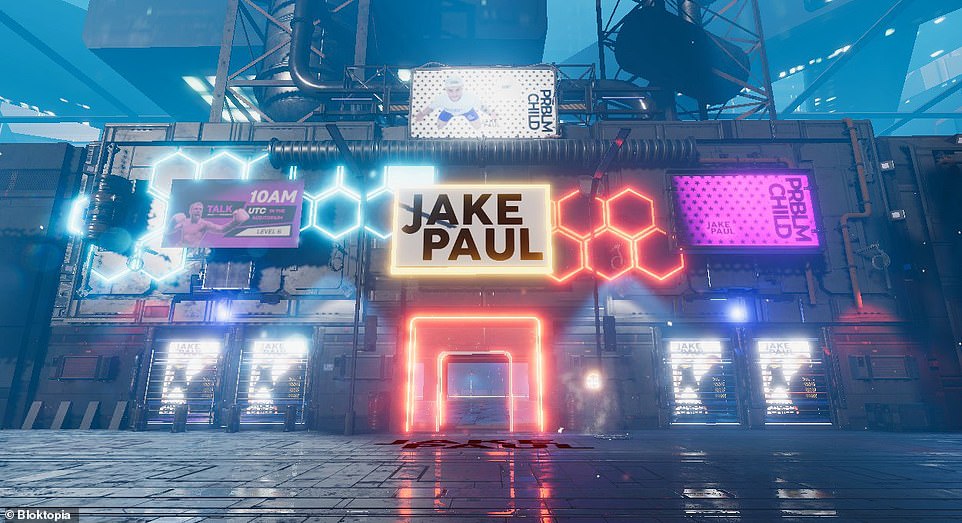 Built with valuable BLOK, a cryptocurrency, Jake Paul’s home is one of the first build in the metaverse

‘When I first found out about Bloktopia, I thought it was such a unique opportunity that I had to get involved in it,’ Paul said.

Tia Kofi and fellow drag acts Blu Hydrangea and Adam All appeared in person at a catwalk at an event in London in September.

But their outfits, created by British designers from the LGBTQ+ community, were augmented virtually on the big screen behind them. 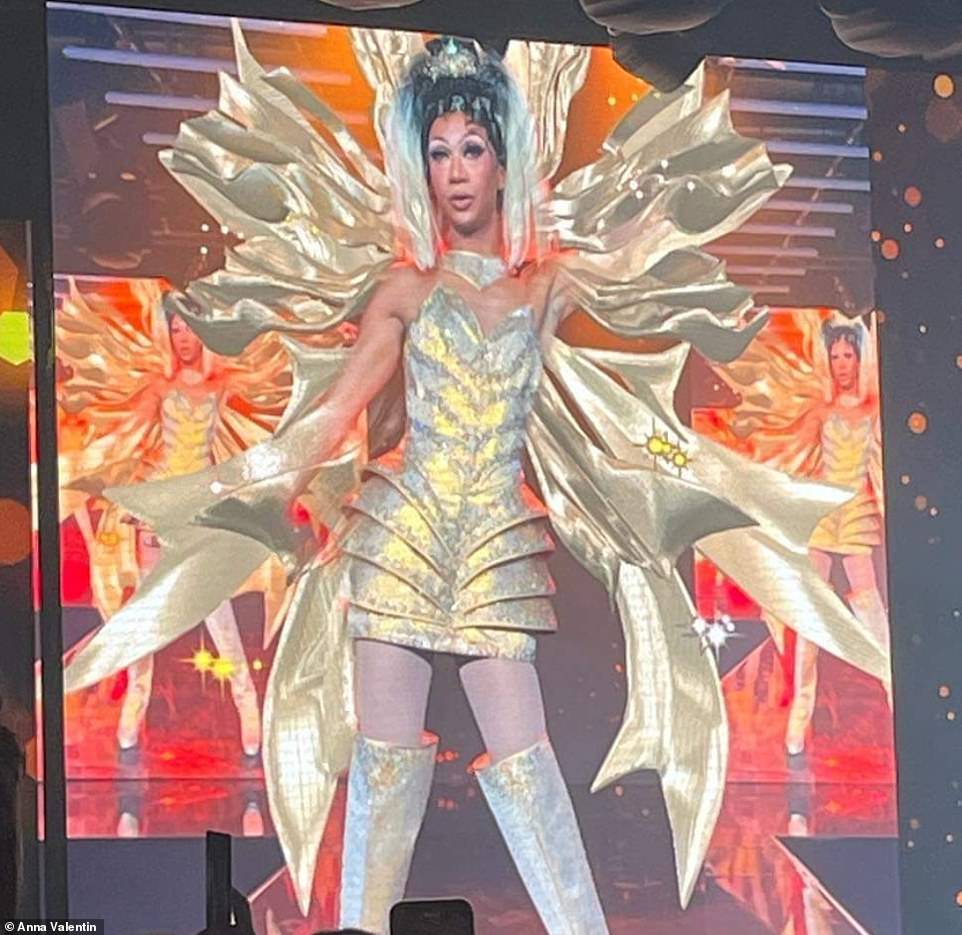 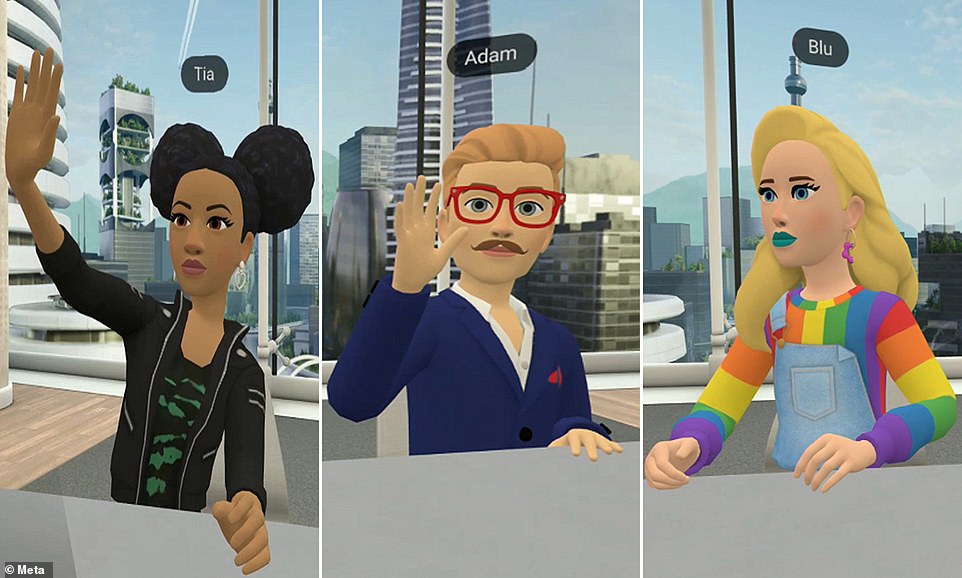 Meta also enlisted Blu Hydrangea (winner of RuPaul’s Drag Race: UK vs. The World) and Adam All (one of the world’s most well known ‘Drag Kings’). The three drag acts and their designers collaborated on their creations in Horizon Workrooms, Meta’s VR workspace platform. Their respective avatars are pictured here

The metaverse can free drag acts from the ‘limitations of the physical world’ and create even more outlandish outfits, according to Meta.

The three drag acts and their designers collaborated on their creations in Horizon Workrooms, Meta’s VR workspace platform.

It’s now a year since Zuckerberg’s firm announced it was renaming itself, as part of its long-term project to turn its social media platform into a metaverse.

Zuckerberg, who co-founded Facebook in his dormitory room at Harvard University in 2004, has described the metaverse as an ’embodied internet’.

Within years, Facebook users will be able to use the platform not on their phones or computers, but by donning a headset.

Rather than swiping the screen of a device, they could potentially meet up with a Facebook friend in a virtual shared space – like an ultra-realistic simulation of another planet or an idyllic garden – and vocally chat to each other’s avatars.

THE FACEBOOK ‘METAVERSE’: A VIRTUAL WORLD WITHIN A WORLD

In a recent interview, Mark Zuckerberg said that over the next five years, he wants people to think of Facebook not as a social media company, but a ‘metaverse’ company.

That is one that is akin to a virtual environment where people can work and play for most of their 24 hours without leaving their home.

‘And my hope, if we do this well, I think over the next five years or so, in this next chapter of our company, I think we will effectively transition from people seeing us as primarily being a social media company to being a metaverse company,’ Zuckerberg said in the interview with The Verge.

‘And obviously, all of the work that we’re doing across the apps that people use today contribute directly to this vision in terms of building community and creators.

‘But this is something that I’m spending a lot of time on, thinking a lot about, we’re working on a ton. And I think it’s just a big part of the next chapter for the work that we’re going to do in the whole industry.’

So what exactly is the metaverse?

As Zuckerberg describes it, it’s a ‘vision’ that spans the entire tech industry, calling it the successor to the mobile internet.

‘But you can think about the metaverse as an embodied internet, where instead of just viewing content — you are in it,’ he continued.

‘And you feel present with other people as if you were in other places, having different experiences that you couldn’t necessarily do on a 2D app or webpage, like dancing, for example, or different types of fitness.’

The Facebook CEO says his vision – which he has been working on for several months – would not only reach into virtual reality, but augmented reality, computers, mobile devices and game consoles as well.